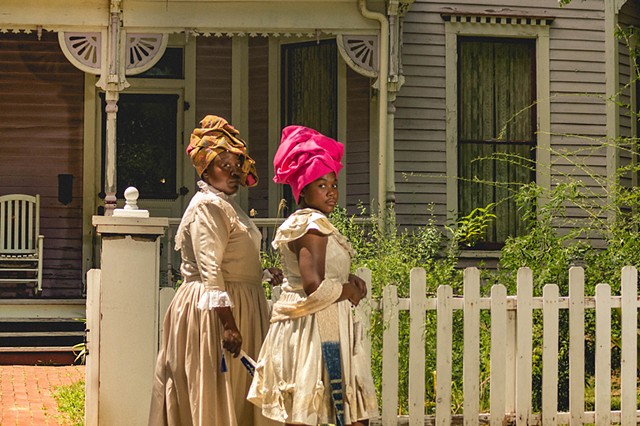 The following is a conversation between two men walking the streets of New Orleans in the late eighteen century under Spanish colonization.

“Hah----what’s that. A fine figure, a beautiful foot, an ankle like an angel’s---an air quite distinque, and then so strange, and characteristic—so Spanish, with that long black veil over the head----‘Allons, we will pass her. Why she’s a mulatto—Fie—not at all--- don’t let her hear you--- that’s a quadroon. A quadroon! Well, I’ll know better next time. Are those quadroons on high there, in the balcony that projects from that Spanish looking house with ornamented cornice and window frames and flat roof? One of them has a veil, and all that I see are darker than she we have passed. Heavens no, they are creoles---natives, whites--- Spaniards and French mixed---born in the country---very good society. No indeed they are not quadroons. You must make a distinction. Faith so I perceive---And here are more balconies, and more females---and … two old ladies, quadroons---No, those are mulattos, well be it so—the two old mulattos are also smoking cigars.”

In Spanish New Orleans, free blacks interacted frequently with slaves as well as whites at work and at play, in the streets, markets, homes, and religious institutions of the city and occasionally married them.

It was the writings of John Latrobe, among others, that King Charles III of Spain read about the social atmosphere of the blurring population happening in the New World, Louisiana that lead to the appointments of governors to establish public order and proper standards of morality. First under Governor Bernando Galvez that lead to the revision of Code Noir of 1777, the Black Code was originally develop by the French government in 1685 for the Caribbean as a guide in maintaining an orderly slave society, it regulated fundamental rights by guaranteeing them a minimum of food and clothing and providing for their baptisms and marriages.

The Spanish revision of the Black Code forbad white men from living in concubinage with free women of color or with slaves and then later in 1786 with Governor Éstaban Miro’s edict of good government, where the Tignon law is originally announced. This image is based on a 18th century collage drawing with no identification except the presumption that the mother and her quadroon daughter are standing in front of their house.