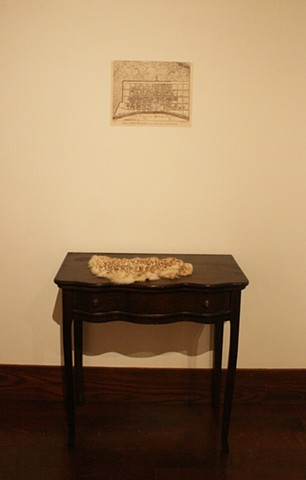 Plan of New Orleans the Capital of Louisiana
Paper
< previous next >

Louisiana was first founded by the French in 1699 as a small military post, the population grew with the founding of New Orleans in 1718. The first slave ship arrived in 1719 by the French whose colonists petition the government for to build a plantation agriculture. The French slave trade was between 1719 to 1731, with exception to one shipment in 1743 (St. Ursin 190 slaves). Overall, there were 22 ships with about 6000 slaves.

In 1729 there was an alliance with the Natchez Indians and African slaves, 10 years after the first slave ship. Together they wipe out 10% of the surviving French population who suffer from disease, starvation, massacre, and abandonment. Louisiana after 1729 left behind a huge majority of Africans in French settlements (infrastructure), making Africans the majority in the earliest stages of colonization.

Colonist had originally advocated for slaves to build a plantation agriculture economy; however, their efforts were not consistence in growing indigo, sugarcane, tobacco, or rice. Instead the economy was based on subsistence farming and trade that included clay, lumber, and deer hides. It was through face to face networks that help the early white Europeans and African slaves survive.