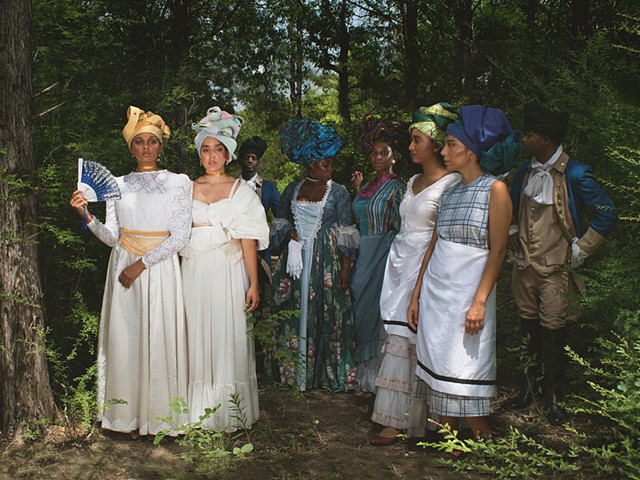 Sans Luis La Nuit & Gota’s imagery is based from an Italian painter by the last name of titled “Three Women of Color with Their Children and Servants in a Landscape” conveying two sisters walking with their mother along with their children and African servants, the painting is part of the permanent collection at the Brooklyn Museum of Art.

Brunias lived from 1730 to 1796 and was based in London, after the Seven Year War (1754-1763) that involved both Britain and France, British government sent Brunias in 1770, at 40 years old to the newly acquired Caribbean islands, like Dominica, Haiti, and Barbados. He was commissioned to promote upper-class plantation life, he painted Caribbean cities that are described as “verite ethnographic”, ethnographic truth; meaning realistic and reflective of reality. Brunias paintings were both equally escapist as they were romantic.

A scholar references Cuban novelist Alejo Carpentier’s book, “The Kingdom of this World” published in the 20th century who wrote about African and Haitian-American’s hardship for both slave and free during the late 18th to early 19th centuries. In Carpentier’s book he references “The Profession of Faith” written by Jean-Jacques Rousseau (b.1717-1778), most known for The Social Contract political writings, that discusses relationship between man and society, his most well-known line “man is born free and everywhere he is in chains”. Rousseau express the idea that government should be based on rights and equality of everyone, not just the wealthy. Brunias who is strongly associated to West Indies art, offers great visuals to the experiences of others that go beyond his original task.

Eighteen century life was complex in many parts of the world, Brunias paintings are reflective of the Caribbean but can also visually describe experiences of the people of color population, both slave and free in Louisiana. In the Devil’s Lane, a scholar makes note to the gender imbalance in New Orleans that favored female slaves who were likely to be employed as domestics at places like inns, bars, and boarding houses. For urban slaves near ports had greater opportunity to interact more with travelers and white Europeans, in which they were known to be prominent in marketing that included street vending, that led to more possibilities in earning money.

Sans Luis La Nuit & Gota is a trading company operated by both male and female free blacks living in New Orleans, who supplied a large variety of valuable goods to residents of St. Martin, Opelousas, and Attakapas Post during the 1770s to 1780s. Interaction and mobility opens more opportunities for interracial unions and concubinage, which became a realistic way out of slavery for some urban women slaves, including rural slaves.

With mobility and earning wealth meant to be reserved for only white Europeans, the Spanish government’s idea to use the Tignon to oppress involuntary exchanges among a racially mix society highlights unintended consequences. Sans Luis La Nuit & Gota, illustrates both wealth and mobility despite the Spanish governor’s edict of good government.