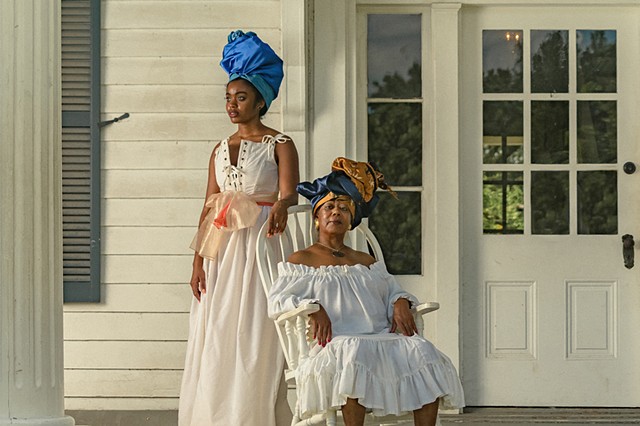 Senegal is a region in West Africa and supplied two-thirds of Louisiana African slaves during the French Slave Trade. All women came from the coast of Senegal were probably, most likely from the Wolof tribe of Senegal in Louisiana as slaves. Wolof women played the most crucial role in forming and passing on Louisiana Creole culture. Reasons being, they were the first to arrive and largely birth the first generation of Louisiana Creoles of all statuses: wives, concubines, mothers, workers, and entrepreneurs. The first generation became fully develop between 1770 to 1803. French officials testified, to the beauty, intelligence, and remarkable adaptability of Wolof women, and further described them as lustrous, very dark skin, and elegantly dress.

This image is based on a 1796 print drawing by an English artist name Thomas Rowlandson of Rachel Pringle-Polgreen, who was the owner of the first established Barbados hotel around 1782, making her one of the wealthiest citizens during British colony occupation. In the original, Rachel is depicted in front of the famous hotel in Bridgetown, Barbados, bejeweled and turbanded with a sign offering “Pawpaw, sweetmeats and pickeles of all sorts by Rachel Pringle Polgreen”. There is also a younger version of her depicted in the same portrait, along with her father William Lauder whom her mother was a slave to and her husband Thomas Pringle who is said to have rescued Rachel from her incestuous father.