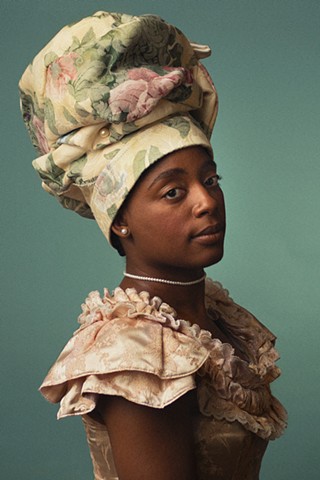 Ironically, Spanish law encouraged the freedom of slaves, through the practice of Coartación, (self-purchase) based in Roman philosophy, a slave had a right to buy his freedom. Once freed it was no longer illegal beginning in 1769 under Spanish law for people of color to receive inter vivios (living) and mortis cause (dead) donations from whites. Cohabitation that mostly benefited the white European man during the earliest years of settlement, now more directly and openly benefited their African cohabitants and their racially mix children.

Free blacks inhabited an intricate, complex, and ambiguous world, they had to tread carefully and artfully within a patriarchal society that valued males more than females. The free women of color fought daily oppression and sought to identify by striving to attain what was important to them: freedom for themselves, friends, and relatives, stable, long lasting unions that produced children and cemented kin networks; prosperity for themselves and future generations; and respect as hardworking, religious members of the community. The free blacks had advantage in unique hybrid choices and constraints that white European women and slave women rarely experienced.

Louisan Chastang was only one of many propertied, influential free women of color who had identities both with their white cohabitants and ties to white community alongside their African origins and ties to slavery. As the “beloved companion” of Jean Chastang of Mobile, who wrote in 1805 that he bequeathed to his “beloved worthy friend and companion, Louison, a free negro woman, who has resided with me for twenty years past and has been my sole attendant in health and particularly so in sickness”, together their relationship lasted over 30 years and produced 10 children who were acknowledged by their father. Jean willed his real estate and dwellings “lying on the opposite side of the River Mobile”, in addition to four slaves, cattle, silverware, furniture, and his corn crop.

This image is based on the original pastel drawing by a Swiss artist named Jean Etienne Liotard (b.1702-1789), who was the most sought-after European portrait painter with a reputation as an outstanding pastelist, able to convey beautiful details within textiles. The original drawing is titled "A Young Woman” and is also known as “A Young Black Girl”, nothing is known of the girl’s identity, only speculation that perhaps it was commissioned by a gentleman or lady of the house that accommodated the artist. A curator in the book “Images of Blacks in Western Art” references the drawing as the beginning of black women being represented that didn’t follow earlier conventions of black servants in noble households. Her headwrap is precisely what she might have worn for protection against the sun in a hot climate. “A Young Woman” can be found in the St. Louis Art Museum collection.