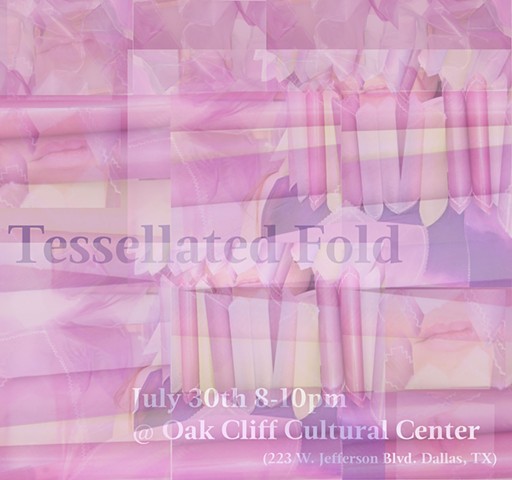 Tessellated Fold is an exploration through fiber art installation that influences sound, video, dance, and fashion; that together seeks to push boundaries in shared spaces with viewers. Between all creative genres lies formal and informal ideas with created experiences, Tessellated Fold provides opportunity for both the artists and viewers to experiment. Beginning July 30th through September 2nd, Tessellated Fold will be on view at the Oak Cliff Cultural Center, with nightly window video projections starting at 8pm and with an opening reception from 8-10pm that includes a single night performance by Lily Taylor and Brown Girls Do Ballet on July 30th. This exhibition is funded by the special support grant for individual artists through the City of Dallas. Featured artists: • Sculpture- Chesley Antoinette • Sound- Lily Taylor • Video Projections- Sean Miller • Choreography & Dance- (BGDB) with Ashley & Layla • Fashion & Accessory Design- Nic Moore & Cantoinette

Bio: Chesley Antoinette is a producer and artist working with wearable art and sculptural installations using combinations of textile techniques and alternative materials. Back in 2009, Chesley received her B.F.A in Sculpture from Stephen F. Austin University and in 2013 her M.F.A from University of North Texas in Fiber Art. She currently teaches for Mountain View College and offers workshops throughout the city.

Sean Miller is an artist working with video, sculpture, installation, live media, performance, and sound art. Sean received his BA in Intermedia Art from the College of Santa Fe in 2004. He is currently teaching at Southern Methodist University and the University of North Texas where he received his Masters of Fine Arts in the spring of 2014.

NIc Moore is no novice to designing and crafting fabulous wearable art, commonly known as couture. He is a self-taught designer who has been designing men and women clothes for over ten years and wears his own garments religiously in social settings. When you want to be fabulous or fancy think Nic Moore.

Ashley Ragsdale is a professional dancer, actress and singer, trained in ballet, modern, jazz, tap, African, and hip hop. She is an alumni of Booker T. Washington High School for the Performing and Visual Arts in Dallas, TX and recently studied at the American Musical and Dramatic Academy in New York with a focus on musical theatre. Ashley is currently performing and stage managing around the D.F.W area including the House of Blues.

Layla Brent is a recent graduate with dance honors from Booker T. Washington High School for the Performing and Visual Arts. As a classical and contemporary ballerina, Layla is also trained in modern, jazz, lyrical and African dance. Awards include scholarships, publication features and promotional videos with institutions such as C4YL Foundation and Dance Council of North Texas.